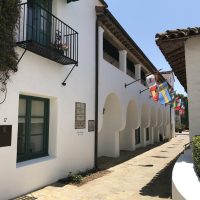 VIDEO of Broadcast    KEYT TV WEB EXCLUSIVE: Ready to have your mind blown with a history of Santa Barbara you may not have known existed?  You can now take a ghost tour of Santa Barbara, complete with narration, all with this simple app.  (By Oscar Flores / KEYT.com)

I have this app it’s pretty cool!!!! I’m gonna do it again soon!! Would be a Great date night!!!  Facebook Comment from SQ

SANTA BARBARA, Calif. – You don’t have to wait until Halloween to have some ghoulish fun. You can now take a free ghost tour of Santa Barbara, complete with narration, all with a simple app in the palm of your hand.

The app features geolocation triggered narration by (the author) Professor Julie Ann Brown. Simply visit each point of interest and the narration will trigger automatically. The app also includes easy-to-follow tour paths with a green and red pin on the map letting the user know where they can begin and stop the tour respectively.

Visual audio zones allow the user to see when the audio will be activated. The user can also pause and play the tour as they wish.

I took the app for a spin Tuesday night using my iPhone. The narration will shut off when your phone goes to sleep. A quick modification of my phone settings allowed the phone to remain on for the duration of the tour, which lasts approximately an hour. I suggest you show up with a fully charged phone and bring down the brightness of your screen to its lowest setting.

The app certainly offers storylines that range from romance to murder that will give you a whole new appreciation for Santa Barbara history — from the Post Office to El Paseo, to the Presidio and El Lobero Theater.

Did you know before it became City Hall, the building known as the Pilot House was the scene of a 1921 ghastly murder in which a crazed cobbler decapitated his wife? Or how a forbidden love between two people of different classes turned into a union of hearts in the afterlife, which until this day, it’s been said you can see the ghostly couple visit Santa Barbara during Old Spanish Days Fiesta at the Presidio chapel?

One of the most fascinating stories I found in the tour takes place inside The Pickle Room in old Chinatown, formerly “Jimmy’s Oriental Gardens,” in which men have reported falling over their chair at the end of the bar without having a drink after a friendly, and seductive ghost, sends them into deep relaxation. I did not experience that myself during the tour, but you may have better luck than me.

Photos and text of the locations presented in the tour are all included within the app.

Take the tour in the day to access some interior areas covered by the tour, or take it at night to bring out the real scare and chills.

Download the app for iOS here or Android devices here or search “Santa Barbara Ghost Tour” in the app store. You can also find it here on Tours4Mobile.

A number of live ghost tours are also available for those that don’t want to use the app and can be scheduled for a price ranging from $20 to $75 and featuring historians Prof. Brown and Neal Graffy, along with ghost aficionado Catherine Miller. For more information and to schedule your (escorted) ghost tour, visit https://sbghostwalks.com.

* Tours4Mobile apps are powered by iAppTours. Others apps include: San Francisco and Sausalito, Hollywood/Beverly Hills, Boston, New York City, and Miami. And 200+ eBook tours are available on Tours4Mobile.com as well as Amazon.com

Filed under: Blog
← Previous Next →